I picked up my needle for the first time since returning home yesterday and managed to put the finishing stitches into two pieces – one a VERY overdue travelling pattern, and one I started over the Christmas holiday in NZ.  I would have got a lot more stitching done yesterday if I hadn’t chosen to watch almost the entire season of So You Think You Can Dance (season 9) that had been taping while I was away … that show is definitely NOT conducive to stitching!!  I’m really thrilled, though, to see both my favourite dancers were given “winner” status … the male winner brought me to tears on a number of occasions in the last couple of episodes! Anyway, I’d better get on with what I came on here to post … here are my two finishes for yesterday, starting with Easter Treat by The Trilogy.  This was originally going to be a Crazy January Challenge pieces for 2013 but I started it earlier than expected while I was in NZ – I was never happy with the lack-lustre thread choices, as the ‘sweet pea’ border was really wishy-washy and everything just looked so ‘blah’.  I also wasn’t happy to have pink as the predominant colour and of course had to replace it with blue – the problem being there wasn’t enough of the kit thread, and the only colours in blue I had with me were a lot brighter … in the end I bit the bullet and ripped out the entire border and re-did it in a brighter fuchsia silk I had brought with me and used a brighter blue.  I’m so happy that I did that as I now really love the brightness and colour combinations in this one!

The next one is a travelling pattern that has been well overdue for stitching – I have to admit that I’m quite unhappy with my colour choices for this one.  I chose a rich blue/purple Stef Francis silk for the centre text and border hoping to then add other blues to the mix – sadly, though, when it was stitched the purple colour overpowered everything and none of my colour choices seem to work (not helped by the fact I chose an ice blue linen to stitch it on!).  In the end I chose a dark purple for the contrasting text and just forgot about trying to use blues … I think I’ll definitely be stitching this one again in the future, but next time it’ll be on a plain white Belfast with blue threads!  In the meantime I have other commitments to complete, so that won’t be happening for a little while yet …  I have to admit, though, that I still like the finished version, it’s just not how my mind had planned it! 🙂

I’ve also heard that a couple of finished pieces were received by their recipients, so I can finally show the finished products here (sadly one ornie exchange has gone missing in the mail so I have to stitch a replacement this week to send over to them).

“White Christmas” freebie by The Drawn Thread
stitched on 36ct Pipi hand-dyed linen by Countrystitch
with recommended threads except Kreinik braid and GAST Claret (used substitutes for both)
I can’t find the ‘finished’ photo, which seems to be a regular occurrence for me lately!
(freebie is still available here)

“Joyeux Noel” by Monsterbubble
(my version choosing my own colours)
(I forgot to take a photo of the finished version, so I asked the recipient to take one for me!)

And that’s it for me for now stitching-wise … this afternoon I will be kitting up my next travelling pattern, as well as ensuring all my upcoming rotation pieces have all the threads and fabric kitted up ready for ‘action’.  I’ll be heading back over to NZ again in a couple of weeks, so I want to be much better prepared for it this time round – even though I’ll be working while I’m over there, we fully intend to have some leisure time in the evenings, which for us means stitching time 🙂

Here is my choice for this week’s Theme Thursday (which goes for an entire week from Thursday to Thursday), where the theme is ”Round”.

In continuing to try and find a stitching element to my photo memes when I can, I ended up having a mini photography session this morning after taking the first photo … but hopefully it ties in well with the theme!

Here is my choice for this week’s Theme Thursday, where the theme is ”Brush” – I use an eyebrow brush to fluff up my turkey knot stitches in stumpwork to make fluffy little insect bodies.  This one is my old UFO not completed yet, but pretty much ready for a trim back into the body shape 🙂 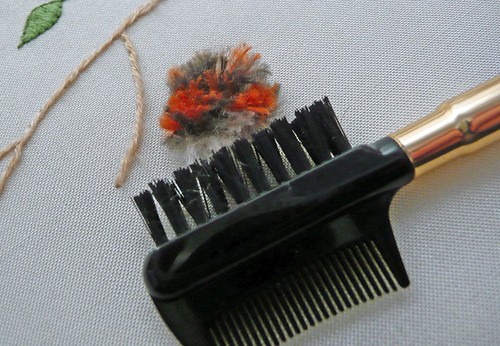 When it grows up, and it’s trimmed back, it’ll look something like this little bee: 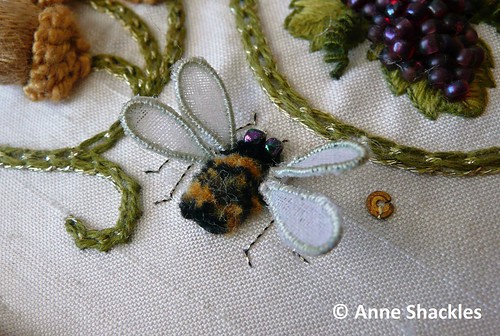 Here is another piece that is brushed up and fluffy – gorgeous thistles! 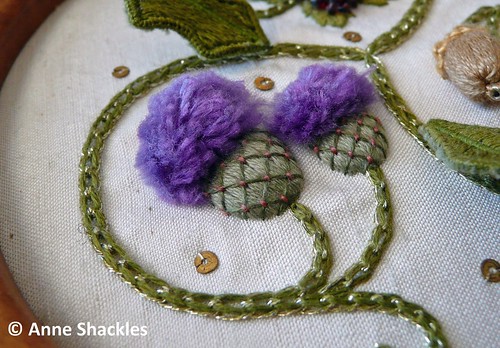 And while I’m showing you the brushed-up parts, I thought I’d share details of the rest of this piece … this is Elizabethan Roundel by Jane Nicholas: 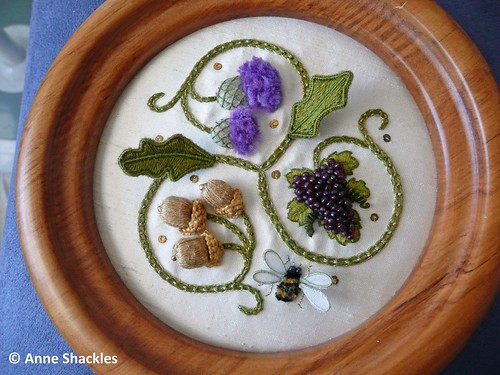 I just love how all the piece stand-up 3-dimensionally on the fabric with the padding and wires. 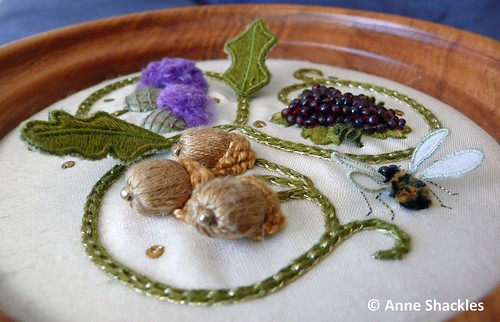 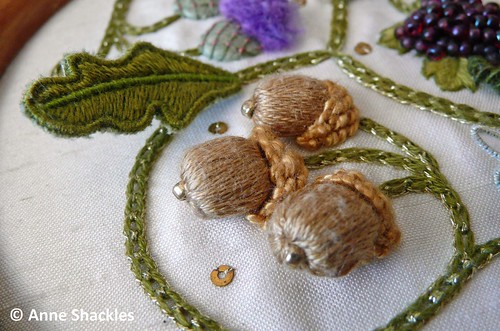 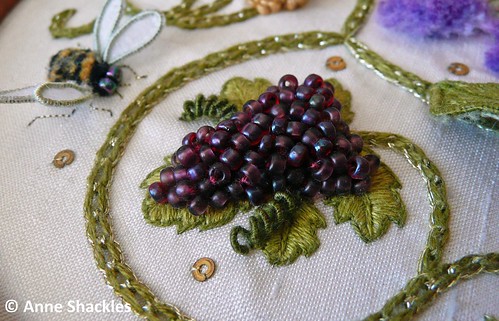 On a different note, thanks to everyone who has left comments with your preferred ONS.  Unfortunately the ONS I’m currently having issues with (accessory packs ordered in January, charts ordered in March) is one of the ‘good’ ones you listed … so I think I just lucked out.  Never mind, I’m going through a mini financial crisis with some major bills coming up that I can’t afford, so I won’t have to worry about stitching orders until at least the beginning of next year!

It also may mean I’ll finally have to clear out my stash and put a lot of it up on Ebay, along with my scissor fobs … I have about $1,500 to find in 10 days for my car registration, which is hilarious (both the actual cost itself, which is twice as much as living in Melbourne, but I also have to buy local licence plates which bumps the cost up, along with the hilarity of finding $1,500 in itself in such a short time).  So my guess is that my car will be taken off the road until I have the funds available – oh my, I’m sooooo not looking forward to being a bus passenger again 😦  I really need to get my car up and running again by the beginning of October, though, as Mum’s coming over to visit and we’ll need it for running around in.  Oh well, I’ve lived on tinned tomatoes once before, I guess I can do it again for a while!

Anyway, enough of these woes and troubles … time to shake it off and jump in the shower for another day of torture in the office …  I was feeling so stressed yesterday I almost burst into tears at the end of the day when yet another hurdle cropped up, which almost immediately burst into anger with the next email … this PMT is a right royal b*tch, I haven’t missed it whatsoever over the last few years – and now it’s back, it’s back with a vengeance!!  Maybe I should start booking in annual leave every month? LOL.

I haven’t been following the Theme Thursday meme very long, but I decided to finally do one of them – as the theme doesn’t get published until the Sunday beforehand, by the time we get it ‘down under’ it’s already Monday – then I’m at work and leaving when it’s dark … it basically means I have to have a photo to do with the theme in my files already, which isn’t always the case … but this time I do, so I thought I would … join in, that is! 😀

In other news, I picked up my needle as planned last night, while Katie and I caught up on a few of our favourite shows – I got burnt out early at work and decided to skive off 1/2 hour earlier than normal and managed to leave just as the sun was going down (geez it felt good leaving in semi-daylight!). Anyway the night was spent with Supernatural, Flash Forward, Bones, Castle, Greys Anatomy … phew! What a difference it makes to the length of a program when taking all the adverts out – love love LOVE my TiVo! 😀

I opted to pick up Boo Club again, and put the wee buttons on the first 6 blocks – managed to do a bit more of the border on each side, so it won’t be long now before I’m officially at the halfway mark (after the Creepy block) – I think I’ll keep doing this one now over the next few nights to try to get it finished (assuming I don’t get too bored and need a break from the border – although I agree that it does go pretty quickly in the scheme of things, and it’s pretty mindless to do in front of the gogglebox with no ‘real’ counting as such).  Alas my WIP photos will be boring for a while though 😛