I picked up my needle for the first time since returning home yesterday and managed to put the finishing stitches into two pieces – one a VERY overdue travelling pattern, and one I started over the Christmas holiday in NZ.  I would have got a lot more stitching done yesterday if I hadn’t chosen to watch almost the entire season of So You Think You Can Dance (season 9) that had been taping while I was away … that show is definitely NOT conducive to stitching!!  I’m really thrilled, though, to see both my favourite dancers were given “winner” status … the male winner brought me to tears on a number of occasions in the last couple of episodes! Anyway, I’d better get on with what I came on here to post … here are my two finishes for yesterday, starting with Easter Treat by The Trilogy.  This was originally going to be a Crazy January Challenge pieces for 2013 but I started it earlier than expected while I was in NZ – I was never happy with the lack-lustre thread choices, as the ‘sweet pea’ border was really wishy-washy and everything just looked so ‘blah’.  I also wasn’t happy to have pink as the predominant colour and of course had to replace it with blue – the problem being there wasn’t enough of the kit thread, and the only colours in blue I had with me were a lot brighter … in the end I bit the bullet and ripped out the entire border and re-did it in a brighter fuchsia silk I had brought with me and used a brighter blue.  I’m so happy that I did that as I now really love the brightness and colour combinations in this one! 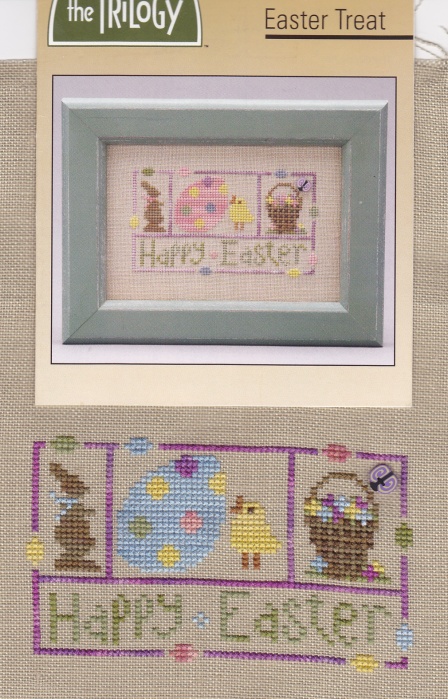 The next one is a travelling pattern that has been well overdue for stitching – I have to admit that I’m quite unhappy with my colour choices for this one.  I chose a rich blue/purple Stef Francis silk for the centre text and border hoping to then add other blues to the mix – sadly, though, when it was stitched the purple colour overpowered everything and none of my colour choices seem to work (not helped by the fact I chose an ice blue linen to stitch it on!).  In the end I chose a dark purple for the contrasting text and just forgot about trying to use blues … I think I’ll definitely be stitching this one again in the future, but next time it’ll be on a plain white Belfast with blue threads!  In the meantime I have other commitments to complete, so that won’t be happening for a little while yet …  I have to admit, though, that I still like the finished version, it’s just not how my mind had planned it! 🙂

I’ve also heard that a couple of finished pieces were received by their recipients, so I can finally show the finished products here (sadly one ornie exchange has gone missing in the mail so I have to stitch a replacement this week to send over to them).

“White Christmas” freebie by The Drawn Thread
stitched on 36ct Pipi hand-dyed linen by Countrystitch
with recommended threads except Kreinik braid and GAST Claret (used substitutes for both)
I can’t find the ‘finished’ photo, which seems to be a regular occurrence for me lately!
(freebie is still available here)

“Joyeux Noel” by Monsterbubble
(my version choosing my own colours)
(I forgot to take a photo of the finished version, so I asked the recipient to take one for me!)

And that’s it for me for now stitching-wise … this afternoon I will be kitting up my next travelling pattern, as well as ensuring all my upcoming rotation pieces have all the threads and fabric kitted up ready for ‘action’.  I’ll be heading back over to NZ again in a couple of weeks, so I want to be much better prepared for it this time round – even though I’ll be working while I’m over there, we fully intend to have some leisure time in the evenings, which for us means stitching time 🙂

I don’t know what has been wrong with me this last year – I’ve been exceptionally terrible at fulfilling promises, and have a HUGE pile of items and gifts that need to be posted to people – I have a massive desire to get rid of the backlog, as it is cluttering my brain (not to mention my bedroom!), so I’ve been making a large effort today to get a few things parcelled up ready to go into the mail next weekend.

Along with that, I’ve realised that I will never stitch with the following threads – I apologise to the kind-hearted soul who sent me these as part of a “summer” theme exchange years ago, but I’m just not a pastels girl, and I just can’t see me using them.  To that end, I have a card already filled out, and the threads are sitting in an envelope, ready to join the rest of the pile to be posted out next Saturday morning (the only chance I can usually get to the Post Office) – and I’m offering a prize draw for these to go to a more fitting home.

Soooooo, if anyone would like these threads, please leave a comment on this post only stating that you would like to go into the draw (if there is more than one comment – if only one person enters then they get the threads automatically).  The closing date is this coming Thursday 1 October – that way I can draw the name out of the proverbial hat on Friday morning and it will give me chance to chase a mailing address on the Friday if I don’t already have it, so I can meet my mailing deadline.

As for the other parcels, there are a number of threads and scissor fobs heading around the world on Saturday … here is the only one I can show you so far, as I’m pretty sure Karen doesn’t read my blog.  I just had to choose a dragonfly charm for her fob in honour of her old shop name of Dragonfly Dreams – I made this one this morning just in time to get in the mail today, along with the Lizzie*Kate pinkeep from a few blog posts ago 😀

This one has gone to Karen at The Stitching Post

I’ll post piccies of the others that have been posted out once I hear that they’ve been received … I don’t want to spoil the surprise in the meantime.