I spent almost the entire weekend sitting in my PJs and stitching my little heart out, while getting square eyes catching up on recorded TV.  I left the house purely to get my hair cut after being over a month overdue for it to be done – I’m glad I can now see through my fringe again, and it’s helped me to feel a lot more human!  Then it was back home again to put on my laundry … and to climb back onto my bed for a marathon stitching session.

The results of the said marathon session was to finish an old WIP last night – I finally put the finishing stitches into this delightful piece.  I have to admit I truly ‘detest’ traditional samplers, they just don’t “do it” for me … but for some reason when I saw this one being stitched on someone else’s blog I just fell in love with the colours and the style of the piece … but only the bottom section of it.  I eventually bought the sampler, and decided to only stitch the part that I really loved … no offence to anyone else who adores the whole sampler, it’s just not “me” (as it is, even this section is so far from being me, it’s not funny!).  Anyway, here she is in all her glory … and on that note I’d better get my A into G and head off into work …

“With My Needle” by The Goode Huswife
stitched with recommended NPI silks, with the exception of the skin colour
stitched on 36ct hand-dyed Edinburgh linen by Countrystitch ~ in colour Haystack

Not much stitching was done on my WIPs this month … instead I was focusing on stitching a gift for Mum … but I’ve also just joined up for another smaller challenge which starts today and that is to complete 3 WIPs by the end of the year.  I may not be able to complete it entirely, as I have another couple of commitment pieces to work on before year-end, but I’ll try to focus each week on getting at least some stitches into those 3 selected WIPs … but the ones I’ve chosen are relatively small, so you never know your luck in a raffle, and I may be able to get them completed in time …

In the meantime, here is the only update I really have on my WIPs this time round – a couple of extra swirls put into With My Needle:

I started a page on my blog here to keep a track of the progress made during the year on my various WIPs – sometimes it’s hard to forget how much you manage to stitch over the course of a year when you put one stitch in here and one stitch in there, so I placed a progress piccie of how everything sat at the start of 2012 – once finished they get their final piccie added and get moved up into the “Completed” section … but for now I can easily see how my WIPs/UFOs currently stand, and it’s a reminder to pull my finger out and get some more moved into the finished section!  I think this will continue to be a feature on my blog until I start moving the bulk of my projects out of the In Progress section!

The other small finish I have is a little freebie that I started yesterday morning when staying at a friend’s place, and finished today:

Updated to add another finish:  Thanks to a public holiday in Sydney today, I also just managed to put the final stitches into my Halloween Fob by The Sweetheart Tree – it’s surprising how long that backstitching takes on these little projects, but it sure does make a massive difference to the end result!  One more WIP knocked off for the year, which is awesome! 😀

Been a quiet month stitching-wise, with only a small section of stitching done of one of my WIPs that has been sadly neglected – I’m probably halfway on this one now, though, and while I’m not enjoying stitching the stems leaves on the flower very much, I’m enjoying the rest of it.  Most people who know the design will be thinking “what is she talking about, she’s probably halfway? that is one big-ass design!” … basically I really don’t enjoy the ‘primitive’ samplers and style of stitching myself, and the whole design just isn’t “me” – but for some reason I really really fell in love with the bottom section with all the gold swirls after seeing someone else stitching it, so I’ve decided to just ignore the rest of the design and am stitching the bottom section only 🙂

I also had a new start and finish, which was one of the charts I bought when I was in Paris – I think I might stitch this one again in traditional red threads, but for some reason I had the sudden desire to stitch it with white silk on a blue linen, and it turned out pretty enough 🙂 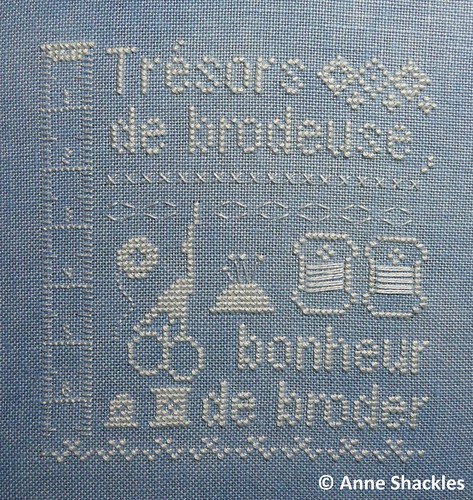 The other stitching I did was for an exchange – I truly love this one, and definitely have to stitch it again for myself!!  I had a devil of a time deciding which “bird” ornament to stitch, hence there have been a few bird ornie finishes over the last 2 months and not much else, but in the end this is the one that I chose because it’s quite different to what others would have chosen I think, and I really love it! It was one of the Gift of Stitching issues, but I’ve just mislaid my working copy for now and can’t remember which issue it was in.  I’ll try to update with the details later 🙂 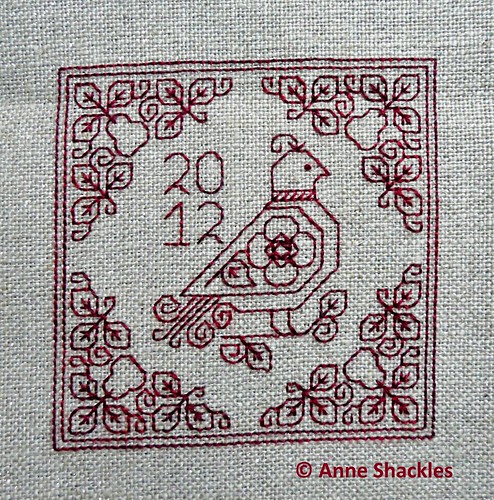 The rest of my stitching time was taken up not doing actual stitching, but doing a whole big bunch of finishing over one long weekend, and I had a blast!  Here were the results – most of them are waiting to be stuffed and have their ‘bottoms’ sewn up, and others need cords to be made and attached, or felt backings and hangers attached, but it’s still a great start to seeing them finished off properly:

I also started another couple of ornie tutorials while I was doing my finishing frenzy, and once I get the cords etc made up I’ll be able to finish those and publish them 🙂

The other non-stitching news is that my flatmate leaves tomorrow … so much to tell on that score, so I’ll leave that for another day … and Mum has offered to come over and help out with cleaning the place in case I need to move out (which is possible) and also be there for moral support. Our last visit here wasn’t perfect after my flatmate had a temper tantrum and was slamming doors etc so it will be really awesome to send a couple of weeks chilling out with no-one else around. And this could be a good opportunity to sit up in the lounge each evening getting some of those ornies finally stuffed and sewn up! 😀

I have other news as well, with photos of a couple of gifts/exchanges received, but I’ll leave that until another post as I need to head off to work now …

First of all Happy New Year everyone!!  I hope you all (if there’s still anyone out there) had a lovely Christmas and New Year, and that 2012 is treating you well so far!!

I don’t honestly know where the last 2 months have gone, but I do know that it is my record for non-blogging – I have ended up having a true blogging break, although it was never intended, so I have neglected both the updating of my blog as well as the reading of your blogs!  Since I came home for the Rugby World Cup final (go the All Blacks!!!) work has been hectic, my social life has been more active, and my stitching has pretty much been non-existent.  I have barely lifted a needle over the last month or so, and the month prior to that very little stitching was done either.  But there was just enough activity to see one old WIP finished … 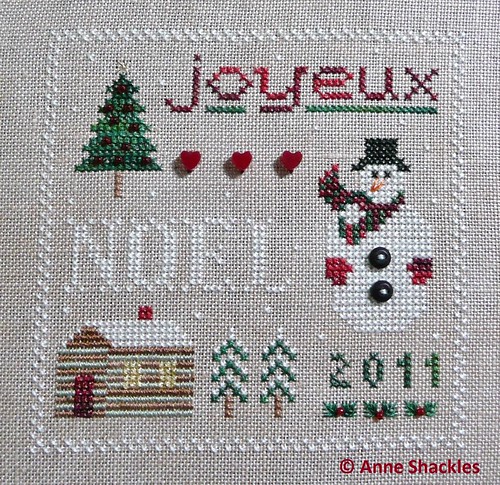 Then I managed to squeeze in one last finish for 2011 – and a nice simple design that would normally be completed in a day of stitching took me about two weeks!! 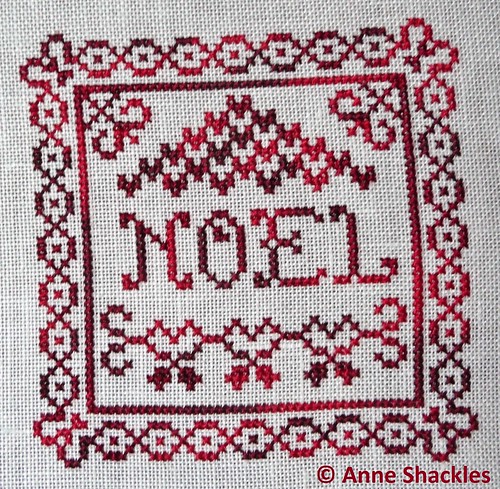 I managed to put a few more stitches into my Goode Huswife design that I started as part of the 2011 Crazy January Challenge … it no longer looks like a gherkin, but still not much closer to a finish!  Pretty much how the entire January Challenge went for me last year – with my change in jobs, and 3 hours commuting each day, it meant my stitching time was very minimal … and I’m certainly not going to be signing up for any major challenges this year knowing this is something that will not be changing!

I did manage, however, to put a few more stitches into another of my Crazy January Challenge pieces, although yet again very far from being close to finished.

This year I am signing up for a challenge, but one that I can easily fit in with my new “hardly any time for stitching” lifestyle – I’m joining in with Measi’s 2012 WIPocalypse challenge.  Seeing as you just have to show progress with your WIPs on a monthly basis, I figure that even I should be able to do that!  Well, I’ll be giving it a go anyway!!  As I also want to remove the pressure from what pieces to work on, I have decided to list all my outstanding WIPs and UFOs and my goal is to just work on them this year with a couple of new starts/Christmas ornaments during the year as well to keep me motivated.  It means the remainder of my unfinished pieces from the 2011 January challenge will be leading the list … plus I have plenty of old UFOs already listed in my sidebar to keep them company!!  When I get my act together, I’ll upload the full list into a new post.

In the meantime, here is my pitiful display of stitching finishes for 2011: