After making the decision to try to finish stitching the blue conversion of Mirabilia’s Red in time for this month’s Mirabilia retreat, I really pulled out all the stops and smoke was coming from my needle! I managed to do it, but only just, and oh my goodness I was shattered at the end of it all!

I have to say, though, I’m so incredibly proud of her – she’s one of my favourite Mirabilia finishes (the other one is Enchanted Mermaid) – and I was very pleased to see that she took 3rd place in the unframed category voting at the retreat! Here she is in all her beautiful glory (albeit a bit wrinkled from the journey to the retreat):

I then sat in a stitching funk for a week or two before deciding to finally put the finishing touches into this very, very old work in progress.  This has been a gradual work in progress over so many years it’s not funny!  It finally got stalled again last year when I couldn’t find my gold paillettes – I managed to find a supplier in the US and bought a few vials ready for any future projects.  This is probably the most challenging canvaswork project I’ve ever attempted, but it’s now done and dusted and in the finished pile.  I don’t ever want to use metallic cord for drawn thread ever again in this lifetime, but gee I’m proud of this one!

28 February – Gadgets!  Show us your favourite stitching gadgets!
Oh my goodness, I have so many stitching tools that I love, I’m finding it hard to decide what to post. I guess the two things that I just can’t live without are my lap and floor stands and my OTT-lites.  I also find Thread Heaven invaluable for using metallic threads in canvaswork so I get less tangles.  I could go on and on … 😉

Oops, I just realised I never posted my first WIP finish for the year – I managed to put the final stitches into Mill Hill’s Starfish back on 10 January, so that’s another WIP crossed off the list this year!!

I haven’t been doing much of anything at all while staying with my parents, as I just don’t have the mental energy to “get up and go” … so the last few days I’ve been glued to the TV re-watching The Tudors DVDs while doing a tiny spot of stitching.  The weather has been abysmal over here, so it hasn’t been the weather to get outdoors (even the waterfront was flooded last week thanks to the tail end of a cyclone), and we’ve all been stuck in front of the TV in various rooms.  My Dad watches his TV at number 63 on the volume, whereas I usually have it between 10-15, so I often run away to the bedroom to avoid a migraine and frayed nerves … which also means not spending time with my folks as there isn’t enough comfy room for both Mum and I in the bedroom … not the best use of an airfare really, but I suppose if nothing else I’ve had a very lazy relaxed time I guess …

In saying that, though, I did spend a couple of days being a ‘techno geek’ for Dad and writing up a 28-page user guide for his mobile phone.  It’s a real ‘mobile for dummies’ with lots of screenshots and captions and step-by-step instructions for how to use his phone.  I guess if nothing else at least I’ve managed to do that for him this trip, so it wasn’t all wasted time 🙂

I also made a batch of my favourite Red Velvet Cupcakes for a treat, but I was really disappointed with them – not sure if it was the batch of flour Mum had, or the fact they don’t have digital scales making it hard to measure the 10g of cocoa properly, or the fact that the Organic Buttermilk here is quite ‘clumpy’ and a totally different texture to the buttermilk we have in Aussie … but whatever it was that was different, they were quite heavy compared to how I make them at home, so not a great treat really

The GREAT part of the trip so far, though, has been having a ‘stitching day’ with some Kiwi stitching pals … while not much stitching actually happened, it was lovely to have show and tell of people’s stitching finishes, and just having a general fun chat.  If I move back to Auckland again, I know this is one group of ladies I’ll definitely be spending more time with, they’re great fun!  Thanks again to Zeb, Jennie and Paula for a really fun day … and to Zeb for some really scrummy Trifle 😀

While I’ve had minimal stitching time I have managed to “almost” finish Fern Pixie by Nora Corbett.  I’ve managed to finished all the actual stitching, but I hadn’t realised there was one whole green bead on one of her shoes, and I didn’t bring those with me to NZ, so she won’t be 100% finished until I get back home again …

But one piece I DID manage to finish was the stitching of Nora Corbett’s Valentine Fairy – I finally frogged the different dyelot in her legs and restitched, then did the remaining metallics and beading … and now she’s 100% finito!!  I still don’t particularly love her, as she’s WAY too pink for my tastes, but I haven’t decided yet whether to throw her on Ebay or not.  Mum’s actually said that she likes her, so it’s quite possible that she’ll end up staying here in NZ and living the rest of her days in Mum’s bedroom … maybe 😉 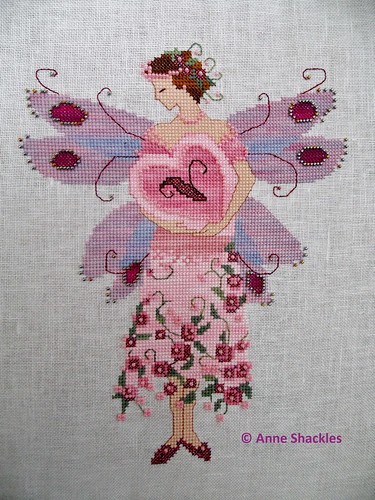 Been an interesting few weeks – I finally got to see a Rheumatologist about my back/foot/finger joint pains, and we think I probably have psoriatic arthritis – if it is, then it’s quite possible it is treatable with medication, which is wonderful.  It also seems that it can cause mood changes, so perhaps this has been behind my depressive episodes all this time?  The time-frame since my joint pains started getting really bad is probably around the same time, so it is quite possible I guess – I’ve had really bad pains for at least 3 years now.  Anyway I have an MRI booked in for the end of July, and then hopefully a week later I’ll get a formal diagnosis and I can start a treatment regime … I’m sick to death of feeling so crappy all the time, so anything that can improve my state of mind and pain levels would be just wonderful!!

In the meantime I’ve been spending a bit of time on the weekends stitching (no more time during the week now, seeing as I’m back to murderous commutes again) … I managed to put a pretty good dent into the stitching of one of the tail fins (or whatever the heck you call them).  Sadly I can see I’m going to run out of two of the Kreinik braids, so I have been “forced” to send away for a little order from 123stitch this week to get them replaced (which was shipped inside 24 hrs of ordering, bless them!).  I have to admit the main reason I put the order in straight-away was that I also noticed they had 25% off Christmas stocking kits and I’ve had one of those on my wishlist for months now … perfect time to suck it up and order it at the same time as my Kreiniks (plus a couple more threads off my wishlist).  I must say, though, I really wish they stocked Rainbow Gallery threads, as I have a bunch of those I need to order as well 😦

And just before I head back to bed for a Nana nap (I haven’t been feeling well this week, and my stupid flatmate woke me up when he came in last night then continued to talk loudly on the phone until 11.30pm!), I’ll show you a bad photo of my Enchanted Mermaid as she currently stands … I really need to find my camera cord so I can use my camera again instead of my iPhone, ‘cos I just can’t seem to manage a decent crisp photo on my iPhone (although that could also be because I’ve been uploading them to Facebook then downloading again to the PC hmmm)!!

Just a fly-by visit while I’m sat at the PC … to show my latest finish, which is fresh off the Qsnaps tonight.  Sadly the photo was taken under the glare of my OttLite on a dark winter’s evening with just my iPhone, so it doesn’t show off her bling etc very well, but she’s WAY more stunning in real life … you’ll just have to take my word for it …

stitched on 28ct hand-dyed Cashel linen by Stitches & Spice ~ colour Dawn Light
with recommended threads – with the exception of a couple of small changes, which are:
skin colour I chose DMC 950 (instead of two-toned), DMC 792 for the bluebell backstitching,
and some additional laces on her ‘back’ leg