So far the year has kicked off well stitching-wise … while I may not be churning out the stitching every week like I used to, I’ve managed to finish off a couple of older UFOs – all they need now is the actual ‘finishing’ to be done on them.

It looks like I actually kicked off 2017 with … {ahem} … {cough} … 44 WIPs/UFOs when I went back and counted them. Yikes!!  It’s no wonder I’m making a serious effort this year not to start a lot more, but trying to concentrate my efforts primarily on finishing these once loved projects.

The first finish of the year, though, is one that I can’t count as a previous WIP, as it was the wee Frangipanis kit that Mum started years ago but never finished.  I managed to find a number of substitute threads in my DMC stash that seemed to work OK, and finished this off towards the middle of January.

I managed to meet one of my year’s goals – I finished the Letter R of Country Threads’ “Paris” kit.  If I don’t get anything more stitching this year that’s OK, my goal was at least to finish this one letter … but I’m sure this one will see the light of day at some point during the year, and maybe I’ll get another letter done … maybe …

The next piccies are the two WIPs that I slayed this month.  The Red Lace Sewing Case I started two Christmases ago while watching the first 4 seasons of Game of Thrones … strangely enough I’d bought the DVDs of the same later last year, so I had to laugh when I realised that I’d actually finished the stitching while re-watching … you’ve guessed it … the Game of Thrones seasons 1-4!!  This is how it looked before Christmas:

And the finished pieces since then:

Lucky last was this one – it’s became a bit unloved a while ago after realising I’d only bought one skein of the blue silk I needed, and replacement threads were an entirely different colour.  With only the needlebook left to be stitched, I stitched and unpicked three different thread options before deciding on the final one – a premium silk by Hand Dyed Fibers.  Then I also ran out of the beigey thread after stitching the outside needlebook pages … I just may have squeezed it in with the last strand of thread, but didn’t want to take the risk (I’m pretty much 99% sure I would have run out).  So for that one I ended up stitching the inside needlebook pages with another different thread – a Madeira silk this time.  Oh well, it may be a mish-mash of threads, but it still looks OK I think … and better to be a finished mish-mash than sitting in the WIP pile for years and years!

And now for the February question:

What SALs are you participating in this year?
I’ve decided to have an easy time this year, and just want to focus on my existing WIPs with the occasional new start thrown in.  That means that I’m not really joining in many organised SALs in 2017, unless anything in Facebook groups happens to fit with my normal stitching plans.  The only ‘real’ SALs that I’d like to continue with are the following:

1) Hallowe’en SAL – one of my favourite SALs each year run by Jo, I’ll be doing the same as last year and hopefully choosing a larger project or two that will let me stitch a portion of it each month to match the month’s theme. January’s theme is “Moon”, so I’d better get cracking and work out which design I’m going to stitch on this year! The other themes coming up are Witches, Spiders & Cobwebs, Winged Creatures, Black Cats, Anything Green, Ghosts, Creepy Trees, Spooky Words, Pumpkins, Candy Corns/Food, and finally a Free Choice month.

2) JCS 2016 ornie SAL – a Facebook SAL continuing in 2017 after a successful challenge in 2016, another chance to stitch a Christmas ornament each month, with the aim to stitch 12 ornaments by the end of the year (from last year’s JCS Christmas Ornament issue). The polls were late being put up and the results have only just been advised, so I probably won’t start for a few weeks yet, then I’ll have a mini catch-up.  It was a lot of fun to do last year, so I thought it would be fun to participate again in 2017.

And that’s it for my SALs list … pretty much the shortest list I’ve made in years … and likely the first year it’s been a very responsible list that just may be achievable – maybe! 😉

This month I decided to work on one of the pieces from Grandma’s Stitching Treasures by The Cat’s Whiskers.  This is the scissor pocket from the set … or at least it will be once it’s finish-finished 🙂  It was really enjoyable stitching this one … now I’m looking forward to stitching the remaining two pieces – the scissor fob and the needlebook.  I think the scissor fob will be the next one to be stitched.

Another week has gone by, and not much stitching has been completed in that time – the only thing I’ve been working on this week has been my Halloween Fairy with a few more stitches put in Mon-Thu this week.  I’ve made OK progress on this one, but it’ll be a few weeks yet before she’s finished (not just stitching-wise, but I realised I’m missing two Kreinik braids which I’ve had to order and wait because they’re out of stock – I had a store credit to use up with Needle in a Haystack, so I decided to put it to good use with my braids).  I have to admit I’m enjoying stitching her with her decent sized blocks of colour 🙂

The only other news is that my Scissor Pocket Exchange arrived safely at its destination during the week, and thankfully Lillie likes it, which is the important thing 🙂  It was supposed to be a no-extras exchange (love those exchanges), but I couldn’t resist adding a little pair of scissors that I’d bought at the last craft fair we went to, which I used as my basis to choose a thread from my stash to match.  I didn’t think to take a photo of the inside flap, where I stitched both our initials, so I’ve borrowed one of Lillie’s photos (hope she doesn’t mind). 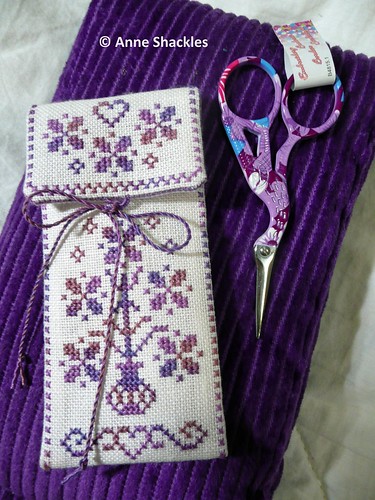 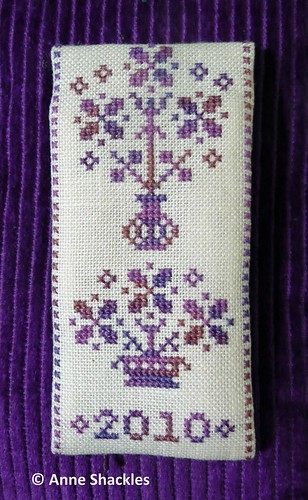 Rightio, time to head off and do something – I need to kit up a Lizzie*Kate Welcome Baby sampler for a colleague’s new daughter, and find a Halloween cape in the depths of the garage for an upcoming fancy dress party for Katie, as well as head out to a shopping mall to actually find a top to wear tonight!

My stitching mojo seems to have deserted me over the last week or so (in fact every kind of mojo has, I think, including my blogging mojo) – I’ve been too tired to do much at all, but I forced myself to put the needle to fabric yesterday and put the finishing touches into my scissor pocket.

I have to say I think the silk colour is a strange choice for these scissors, as there is more turquoise blue than the greeney-blue of this silk – I was actually tempted to replace the silk, but then I thought it would be a waste of money, so I just bit the bullet and started stitching …  It may not be the perfect match for the scissors, but I still really love it 🙂

I also made a start on this month’s Christmas ornie late last night, but I may not get it finished by the deadline of Thursday – will give it a go, though.

Just a short post, as I need to finish getting ready for work.