I don’t know where the year has gone already – I just realised I haven’t posted an update since the very start of the year. I wish I could say I was too busy progressing on my WIPs, but in all honesty I’ve been dealing with depression and a crazy time at work. After being stood down from work yesterday and being moved to working two days a week, it could be the impetus that I need to change my routine and kick me out of my depressive rut – or it will increase it, I guess – time will tell. I do know that I won’t be able to afford any of my bills or put food on the table some weeks for a while, but I also do know that I have a huge stash that is going to see me through these unprecedented tough times – as long as I have a roof over my head!

Anyway, enough of the doom and gloom – time to answer the year’s questions to date and work out if I have an update to show …

In honor of “Leap Year,” tell the story of a time you had to make some sort of a “leap” in stitching – taking the chance on a new style of stitching, attending a meetup or class, etc.

When I lived in Auckland I used to attend classes all the time at my LNS – it took me out of my comfort zone all the time and I got to experience so many different techniques in a supportive environment. I miss those classes so very much! I’m very introverted so it was a big step for me to sign-up to classes on my own, but I’m so very glad I did. I managed to do classes on stumpwork, hardanger, surface embroidery and more … geez I really do miss that so much!

Have you ever adopted a piece from someone else or gave up a piece to someone else? Which piece and why?

Yes, I adopted a Marjolein Bastin cross-stitched piece from someone who had fallen out of love with it. I still haven’t finished stitching it, but it will get done one day, even if it’s to donate to charity as fundraising for one of the animal shelter groups.

Um, yeah … not so much really, considering we’re already a quarter of the way through the year! One or two items have been done, or started, though, so all is not entirely lost!

Belatedly adding my update for November, even though I only have one small update to share. I decided to keep on stitching on Mill Hill’s Three Kings until I got that third king finished … thus ticking one more item off the ‘to-do-list/goal’ for the year. It’s now being put away until 2020 again, unless I get an urge to keep going on the border – never say never!

Question of the Month:  What new stitches or techniques did you learn this year ?

This year hasn’t been a great year for learning stitching-wise, however I just started doing a couple of older subscription boxes from Crate Crochet and learning some new stitches and techniques in crochet. It’s been a nice change learning something new, and not being too stressed at work to enjoy some decent down-time on evenings and weekends. I’m hoping next year will see me doing these projects on time each month again, seeing as I’ve just resubscribed for another 12 months 🙂

Here are some of my projects I’ve been working on this last week or two – I even managed a mandala finish that I’m super proud of! 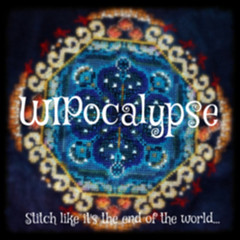 I haven’t been seeing much progress at all on my WIPs since I finished Mirabilia’s Red in blues – instead of working on my stitching I’ve been pottering along on my crochet journey and building my confidence a little bit with that. The highlight has been creating a blanket for my Mum, which I managed to finish and give to her on Mother’s Day during my visit home this month.  She was so thrilled with it, and has been showing it off to everyone that comes to visit. I’ll put photos at the end of this post 🙂

I have managed to wee bit of progress on one of my WIPs, though, and I’ve been making more progress on that since finishing Mum’s blanket. This one is Rosewood Manor’s “Quaker Diamonds” – I really love the colours in this one, but I have to admit I’m not a huge fan of the Valdani threads to work with, or the colour changes every two minutes. It’ll be worth it in the end, though, as I think it’s a lovely design.  This is what it looked like at the start: 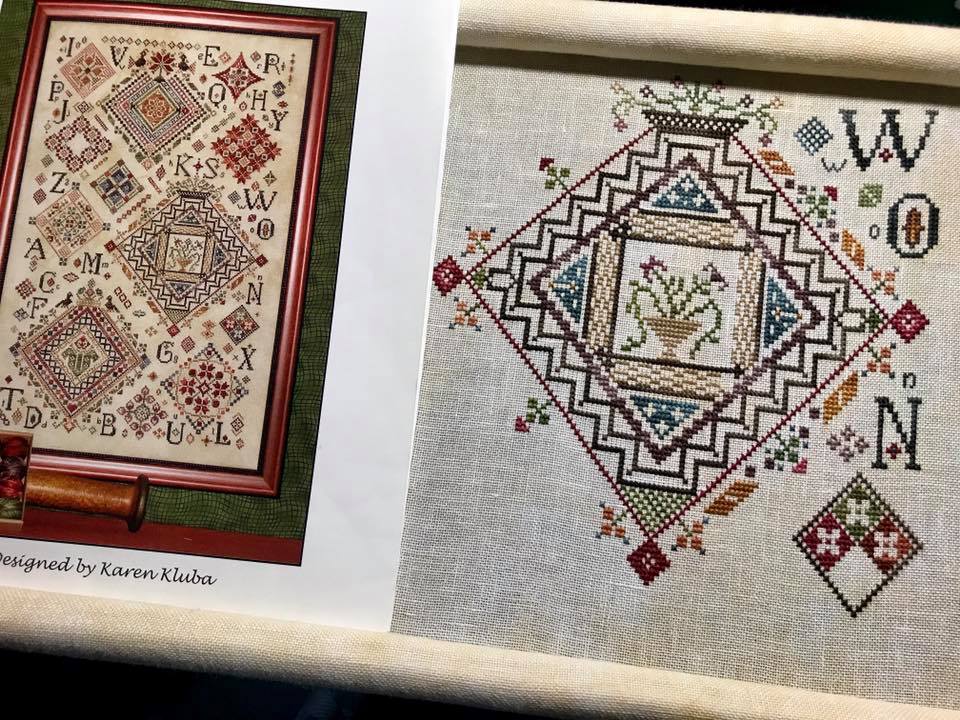 UPDATED TO ADD: Actually I just remembered that I did have one other small update – I managed to stitch the scissor fob for Cindy Valentine’s Bee Keeper Scissor Keeper and Fob. That means the stitching is entirely finished, and I just need to put them together 😀

And because I’ve been so slack with the WIPocalypse updates these last few months (because I had nothing to share), here’s a catch-up of the questions from the last few months:

25 March – What newer designers and product creators (fabric or floss dyeing, etc) out there have you discovered and recommend?
To be honest I can’t say there are any – maybe because I haven’t been looking at all. I like to stick to my trusted favourites if I can, and truthfully haven’t had the need so far to look elsewhere …

29 April – Talk to us about your longest-running WIP or UFO.
My oldest UFO is definitely an old design by Stoney Creek – one of my first ever XS projects, and I’ve stuffed it up so badly over the years, I don’t know where to start to frog it – and if I frog it I’m going to have problem with the dye lots because most of the thread colours have changed (the tree in the foreground probably needs to be frogged entirely). Also I didn’t do the content in the ‘background’ with only one thread, so it’s a total disaster really. I don’t have any love for this one, so not sure if it’ll ever see the light of day as a finished piece. (This isn’t the most current photo – because the tree in the foreground isn’t in this one!!)

27 May – Where do you love to shop for stash?
I now buy locally if I can from a FB supplier – but I still struggle with getting Rainbow Gallery threads for my canvaswork projects and have to order from overseas for those on the whole. After a poor experience from my normal go-to place for threads, I’m on the hunt for another store – the next time I need specialty threads I’ll be trying some new ones out. Otherwise 123stitch is probably still a favourite if I don’t buy locally.

Now here’s my pride and joy for the month – my Mum’s blanket! I had literally just sewn in the remaining ends and handed it to her, and within seconds she’d laid down on the sofa to try it out – she looks so happy here, it really warms my heart!! ❤ Originally it was going to just be a lap blanket, but I thought if I made it bigger it would be more useful anywhere, especially when she’s laying on top of the bed watching TV. She adores it! 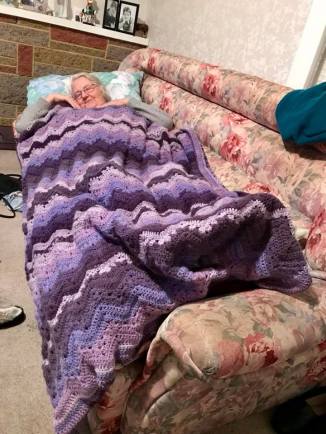 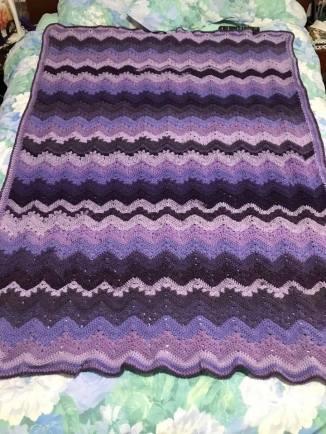 I can’t remember if I mentioned earlier this year that I took a quick class on beginner’s crochet – my first attempts were a bit feeble as you can see below, and my tension is all over the place, as expected. After the class, though, I decided to attempt a dishcloth to practice the basic single/double crochet stitch. You can see the green disaster below with the missing stitches as I lost a few each time I turned rows. I persevered, though, and picked up pretty quickly where I was going wrong – I tried again with another blue cotton yarn and ended up with a dishcloth I was relatively chuffed with (although I still haven’t added a border to it yet).

Life then got in the way, as it does, and I didn’t have the mental capacity to learn to do more. Since moving into the new apartment, though, for some reason I’ve been wanting to learn more and more since pushing my boundaries at the patchwork retreat. I’m a bit bored in my job, I think, so I’ve been craving mental sustenance … what better way than to pull out some cotton yarns and get stuck into doing a bit more crochet again. This is what I’ve managed to get up to over the last couple of weeks …

First up I decided to attempt a coaster – not a perfect job, but not too bad either. I still have to make the mug cozy to go with it (which is the main thing I wanted to make but I accidentally started the wrong pattern then wondered why it was so square haha) – which I’ll do soon. The bigger one was my first attempt – then I got better tension with the smaller one – it’s still far from perfect, but it’s ‘OK’.

Next up I bit the bullet and started my Spice of Life blanket from the Spice of Life CAL by Black Sheep Wools. I thought I may be biting off more than I could chew being so new to crochet, but thought I’d give it a go anyway. I think I’ve unpicked way more than I’ve kept, and finally decided to throw in the towel at the below point to give me time to get a bit more confident before continuing. I’ve managed to lose a couple of stitches I think on the previous row, and I’m not happy with my tension in the last row I’ve done, so one day I’ll come back and re-do those last sections again. For now, though, I’ve decided to shelve it a wee while longer while I get a bit more confident with the basics. 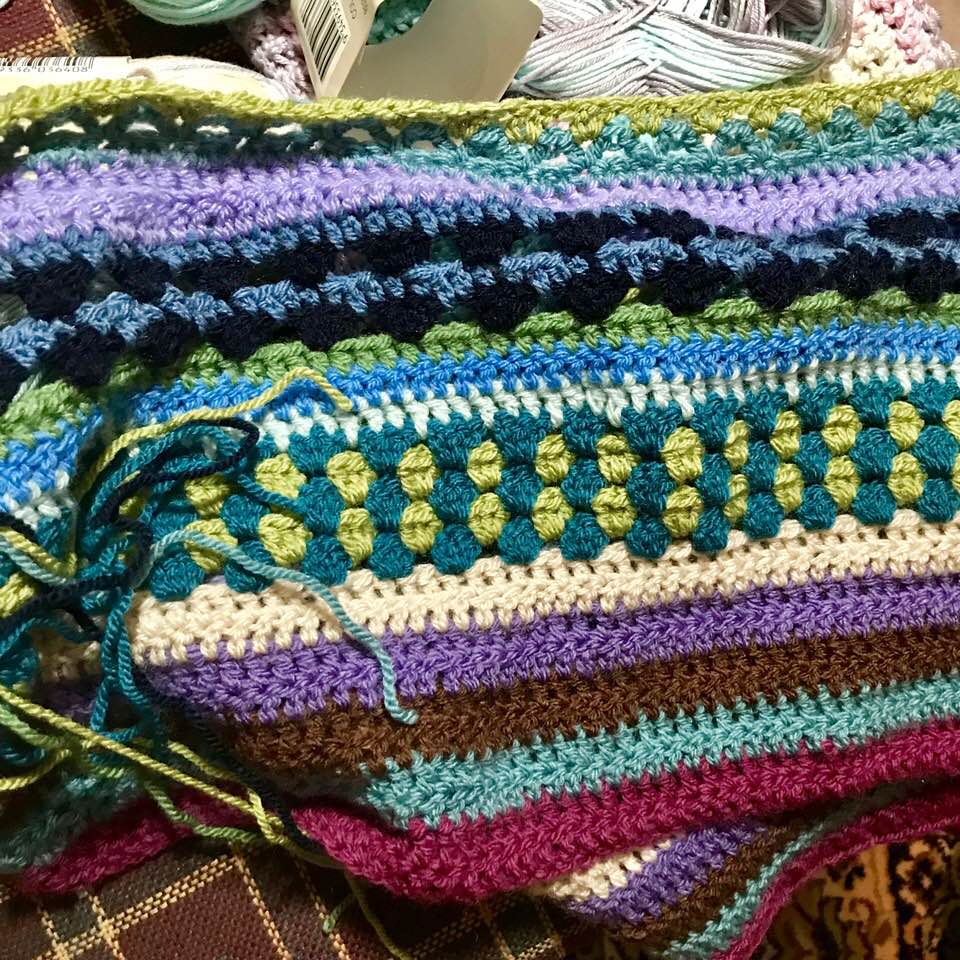 Then I found some ugly-looking cotton yarn (it didn’t look that ugly in the ball, so that’ll teach me not to judge looks by its cover) and a YouTube tutorial for a nubbly dishcloth – the rest is history. The first one was quite large due to looser tension, but also due to a higher number of stitches. The next ones I reduced the stitch count and managed to get a better tension. I’m pretty chuffed with them overall!! When I told my Mum weeks ago I wanted to make some dishcloths, she put an order in for some so these will all be going to her in time for Christmas.

The final thing I made yesterday was a washcloth/facecloth – it’s so incredibly soft, I think I’ll have to make one for myself too! I struggled a wee bit with the stitches of this one until I got a rhythm going about 1/3 in, then it seemed to go a lot more quickly. This is dishcloth #97 from Leisure Arts #3027 The Big Book of Dishcloths. I ordered a copy from the Book Depository before realising you could order a digital download from the Leisure Arts store in Ravelry … so guess who now has both versions, because I couldn’t be patient enough to wait for the book to arrive in the post! 😉 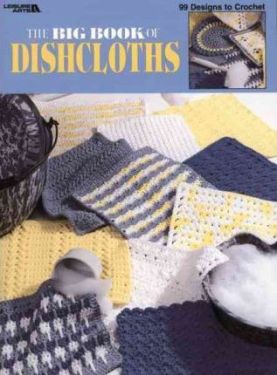 I have some time off at Christmas so I think I’ll be seeing a bit more crafty goodness coming out of the spare time during that time … inbetween doing more unpacking and getting the apartment finally into some sort of order. The big question will be what craft gets air-time first … cross-stitch, crochet or quilting (which is also on the to-do-list) … time will tell 😀