Katie and I have been hitting the lounge chairs almost as soon as we’ve walked in home at the end of each day, as we’re both a bit under the weather and really tired this week – it means we’re also now keeping on top of our TV viewing as well, and watching all our favourite shows within 24 hours of taping them … I’ve got Katie into my mindset of taping everything then watching it the next day and forwarding through the adverts … ah, bliss!

Of course all this sitting on my bottom early has meant a bit more stitching time this week … which would be great if I was stitching to my normal levels, but I’ve been stitching like an old snail this week, and it’s taken me 4 nights to complete one little ornie!  Oh well, it’s better than nothing, and I have to admit it feels good to see one more kitted up finish off the pile. 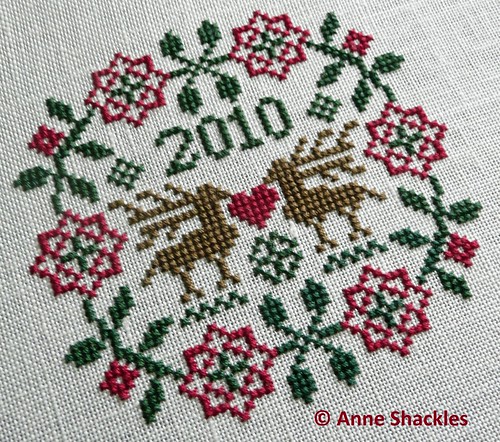 Once I’d finished Reindeer Garden, I also dragged out my Mosey n Me freebie “Love February” – I’ve never been happy with it ever since I stitched it back at the beginning of February … so I unpicked all the cream stitches and re-stitched in the pink colour, plus I was really unhappy with the green used for the rose’s stem, so out that went tonight as well, and I re-stitched the stem with a darker green.  While the photo is really really washed out and bad, I’m a LOT happier with this version than the previous one, and really glad I opted to do some frog-stitching tonight!  Now this one can officially join the “finished” list as well 😀 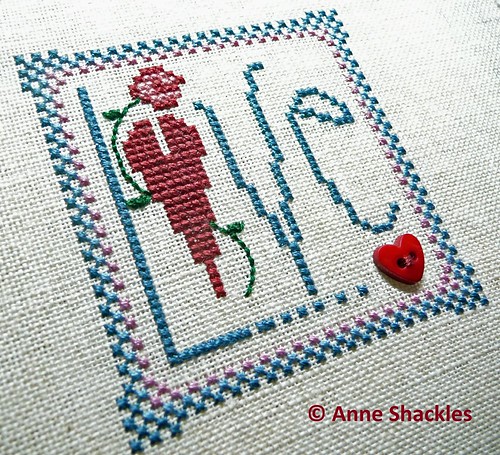 As it was quite late by this stage, and I need to kit up some more charts/fabrics with their actual threads, I started stitching a simple JBW Designs Christmas ornie that was already kitted up tonight … I have a busy weekend planned, though, so no guarantees it’ll get finished until early next week … unless we have another DVD marathon tomorrow night 😉

With any luck my missing thread won’t be too far away now so I can get back to stitching my canvaswork Sapphire Star … I’ve also completed all the stitching of my Periwinkle Promises January Sampler Accent, but I’ve mislaid the teeny tiny bag of blue beads, and don’t seem to have the colour in my stash (Murphy’s Law!) … once I get a replacement packet, I just need to do the backstitching around the back piece of linen, make the corner tassels, and put it all together (I’ve obviously decided to use the linen backing instead of using the fabric for something else).

And on that note I’d better get my A into G and get some of those threads kitted up so I can jump into bed and get some shut-eye, so I’m a bit fresher for more stitching tomorrow night … and of course it’s a big day at work for a change, so I guess being fresh for work won’t go amiss either 😛

First up is the tiny wee finish I completed tonight – I started this on Sunday night, and did a bit more stitching tonight, putting the final stitches in about 1/2 an hour ago.  As per normal at this late hour of the night, without being taken under a daylight bulb, the photo is appalling … but it’s a finish all the same 🙂

It’s also my very first EVER Valentine’s finish … and also the first finish from the pile that I kitted up over the weekend 😀  I almost swapped the cream inner border with the pale pink from the rose, but then decided last minute to leave it … in hindsight the cream really does blend into the background of the fabric, so the pink would have been much much better … but I don’t love it enough to bother unpicking it all.  Not entirely sure how I’ll end up finishing this one – perhaps I’ll just add a ribbon hanger and turn it into a hanging ornament … maybe … 🙂

Next up is a bunch of scissor fobs that I put together weeks ago, but never showed.  Eventually most of these will be going into my ArtFire shop for sale … when I get the time to upload them all and type up descriptions etc – but that is unlikely to happen for another couple of weeks thanks to my impending trip home.  As there are quite a few new fobs, I’ll just upload a few tonight, and add some more over the next few days.

Other than that, nothing much happening out here really … I’m heading out to the Blue Mountains this Sunday to pick up all my stitching I’ve had out there on loan for the last couple of years.  There are personal reasons for my doing this, which I won’t share on my blog – but I must say I’m really looking forward to having them home again … and those that are still unframed will be framed by me some time over the coming year as finances allow … so watch this space 😛