The best part of the year is going back through your progress from throughout the year. I felt my progress was woeful this year, but on review there was still some decent stitching done, along with a few finishes along the way. Going back through the progress piccies has also given me the spark back to get a couple of them finished that were oh so close to hitting the finishing pile. Sadly, though, there are also a huge pile of new starts I want to make, plus I’m a bit addicted to crochet at the moment which is seriously impacting my desire to stitch, as I’m having too much fun learning new crochet techniques!

Due to my financial situation changing a bit this year as well, it does mean that I’ll be stitching from stash in 2018 as much as possible, so any new starts will be coming from my existing stash (which is definitely in the S.A.B.L.E. range, so shouldn’t be an issue – that’s “Stash Accumulation Beyond Life Expectancy”). But on to the WIPocalypse question for month, and the 2017 recap!!

December 31 – Recap your accomplishments for the year! (Your finishes, your final before/after photos, etc).

Well, definitely not the best year for me for getting some progress done on my WIPs … but I did at least manage a little bit of progress (more so earlier on in the year). Here’s a recap of projects where I did make some progress, along with their before and after photos, and the two projects I managed to move into the “Finished” pile:

Topiary Garden(?) by Textile Heritage – Yippee, the first (but sadly only) UFO finish for the year! 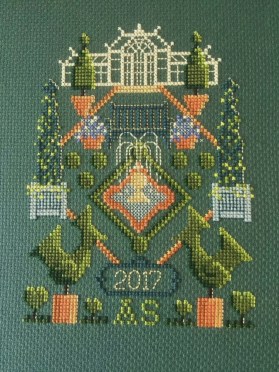 Daisy Blue by HAED – A HUGE milestone for the year, my favourite finish for 2017!! 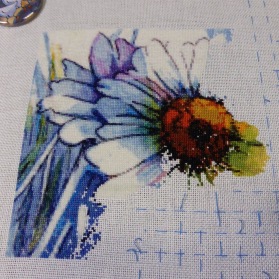 Quaker Diamonds by Rosewood Manor  – a wee bit of progress managed during one rotation slot.

Red Lace Sewing Case by The Drawn Thread – the stitching is finished except for the beading/adding the felt pieces. 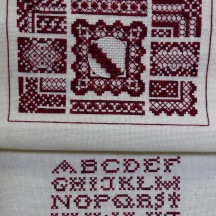 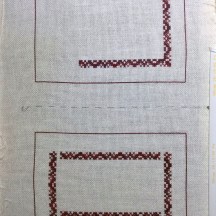 Paris by Country Threads – I managed to finish the letter R, but had no plans to start any of the other letters this year. 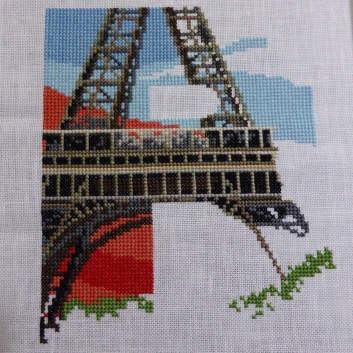 Before: Paris by Country Threads

Before: Paris by Country Threads

Egyptian Garden Mandala by Chatelaine – to say how painful I find stitching this one, I made decent progress this year. I can’t guarantee it’ll be finished in 2018, but I do intend putting a few more stitches into it next year. 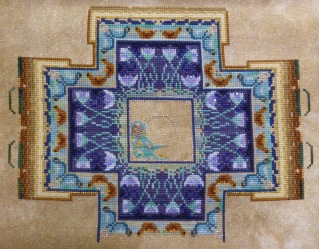 Before: Egyptian Garden Mandala by Chatelaine

Quaker Christmas II by ByGone Stitches – Another one I struggle with, but the odd stitch or two was put in this year to make a tiny bit of progress. 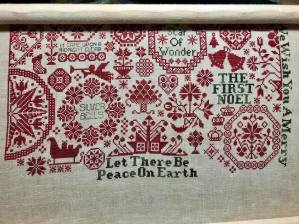 Flight of the Bumblebees by Ruth Schmuff – I’m sooooo close to getting this one finished! I just had to order some replacement gold paillettes to replace those I’d lost (or used elsewhere, which is more likely) – now these have arrived I had no excuses not to finish this early in 2018.

Flight of the Bumblebees by Ruth Schmuff 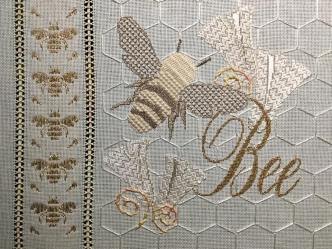 Flight of the Bumblebees by Ruth Schmuff

Grandma’s Cushions Stitching Accessories by The Cat’s Whiskers – I managed to stitch the remaining accessories this year to match the scissor pocket stitched a while ago … everything still needs to be put together though. 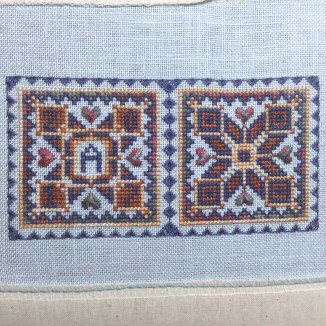 While I managed to get a good head start on some of these, my stitching mojo disappeared after October, so progress halted on these.

Red (done in blues) by Mirabilia 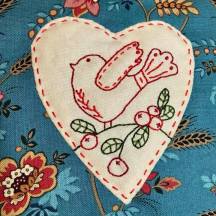 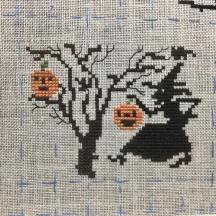 While not WIPs at the start of the year, I did manage to start and finish the following projects – mostly small ornies for an ornie challenge … and sadly most of my challenges petered out from the middle of the year due to a lack of personal motivation.

The Little Things Pencil Case by Hatched and Patched

“Merry Christmas to You” by My Big Toe

“Blue Snowman” by The Little Stitcher 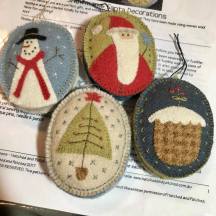 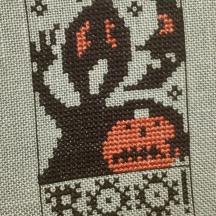 “Boo!” freebie by The Prairie Schooler

Before: Celtic Summer by Lavender & Lace 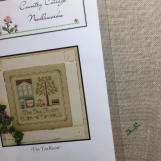 Before: The Tea Room by Country Cottage Needleworks

Before: Finch Song by Shepherd’s Bush 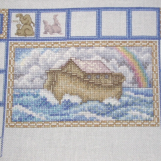 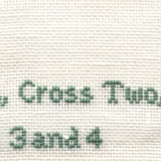 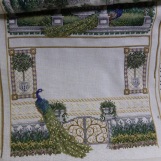 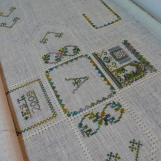 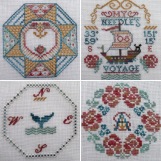 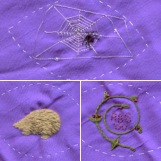 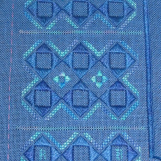 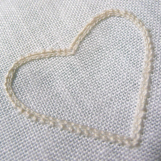 Raphael’s Raspberries by Forget-Me-Nots in Stitches 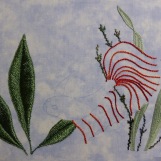 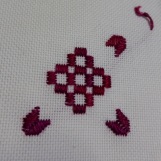 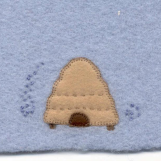 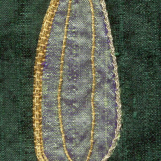 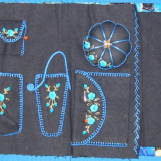 Before: Hussif by Monica Hunt

Honesty and Heartsease by Jane Nicholas

Pomegranates and Beetle by Jane Nicholas 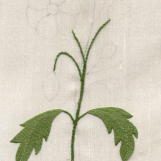