As normal, I totally missed the December deadline … truthfully I haven’t been doing too much stitching, with some more long hours at work that cropped up.  I’m finally enjoying a fortnight off work over the Christmas break, and catching up on some chores, including my final catch-up for the year here.  I spent Christmas Day with my closest friends in Sydney, which was wonderful – we sat superglued to the lounge sofas for 4 days and watched all 4 seasons of Game of Thrones – that also meant I got a bit of stitching done, although I was more distracted by the TV, 2 dogs and 2 cats to get any finishes under my belt 😉  So, here goes the most recent stitching recap, and the final one for the year:

The first finish I had was Poppy by Mirabilia – this is a gift for my hairdresser, whose favourite colour is red, and she asked me to stitch something for her.  I just need to frame it now for her and give it to her in the New Year 🙂 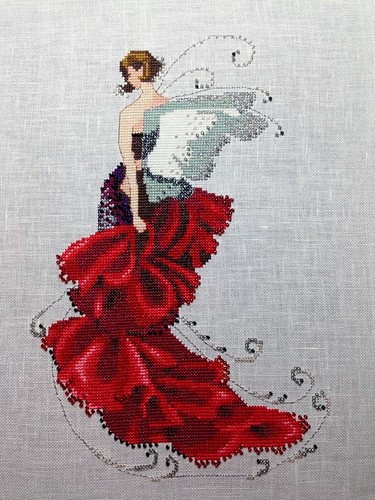 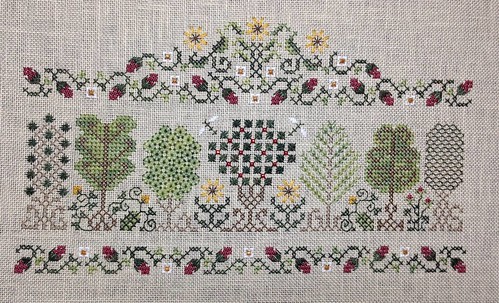 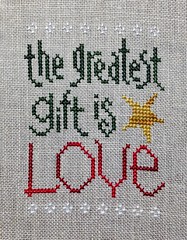 While I was away at Christmas I managed to start the following two new projects (I took those because they were relatively easy to stitch so I didn’t have to concentrate on them 100% while being distracted by the TV and chatting to company).

First up was Red Lace Sewing Case by The Drawn Thread.  Sadly I ran out of thread for this one, stupidly thinking one skein of Gloriana silk would be enough, and no doubt a replacement skein won’t match the same dyelot, but I’ll have to wait and see once I get around to a stitching order. I was surprised just how quickly that design chewed through the skein of Gloriana! This will eventually be going to a new home (hence the hiding of the letter in the centre), so hopefully it won’t look too bad when the new skein arrives …  The only change I made was to use two strands of silk for the alphabet – I used one initially as per the design instructions, but I hated the look of it, so doubled the strands (sadly that wasn’t the reason for running out).

Then I ended up starting a Prairie Schooler design called Autumn Leaves. This has been in my stash forever! In hindsight I wish I’d chosen a lighter fabric so the colours pop more, but I chose 32ct Lambswool that I thought the design called for … presumably they used a different linen to the Lambswool I chose!

Oh well, I’m sure I’ll still love it when it’s finished … (sorry, but the weird colouring of the fabric is due to my bed’s duvet cover behind it!)

It looks like I had a relatively poor stitching year compared to normal, thanks to some mental working hours.  Then again, though, some of the projects were quite large in comparison to other years, so all-in-all I’m still pretty stoked with my progress this year.  Here are all the projects I completed in 2014, including 1 older UFO and 2 WIPs carried over from 2013:

When I was sticking to my rotation it really worked for me this year – and it gave me a place to start again when I did fall off the rotation wagon.  Therefore I’ve decided to keep going in 2015, but I’m leaving it as very much a ‘fluid’ rotation again – if I feel like stitching more than the allocated 10 hours for each slot, I’ll do so … whatever keeps me enjoying my stitching, and actually doing stitching, is what I’ll follow next year 🙂  In saying that, though, there are a few projects that I’d really love to work on during the year – I wouldn’t call them goals as such, rather a wishlist of sorts … but I know I change my mind on a whim where my stitching is concerned, so I won’t be too surprised if I change my mind again during the year!  Anyhoo, here are a few projects that are currently calling my name for my rotation next year:

I can’t see many of those getting done, but I can certainly see a few new starts from that list getting started! 😀  As long as I enjoy the journey and continue to enjoy what I’m stitching, I don’t really have any other ambitions other than that 🙂