Well actually some of my projects have been framed!! 😀  Last weekend I had some of my old energy levels back again, and I put it to good use doing some old jobs that have needed to be done for ages … one of those jobs was to get some framing completed.

There was lots of this happening last Sunday … lacing, and more lacing … 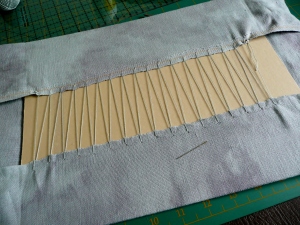 A couple of home-made frames were put together ready to be filled (but not done yet, as I need to cut mats for one of them and it was getting too late at night to do that safely): 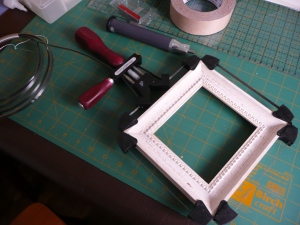 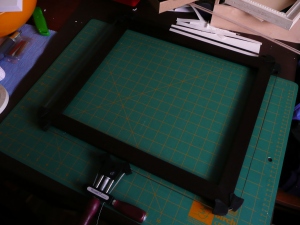 Then a few el-cheapo bought frames were given a lease of life with some projects popped inside of them … first up my Tiger Reflections piece – it took me ages to decide between a black frame and a brown wooden one, but in the end I decided the brown one brought out the tiger colours the best – this now sits next to my stitching chair in the lounge. 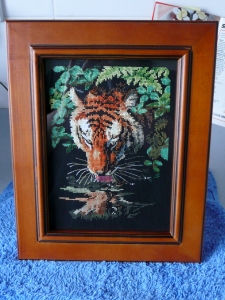 Next up was a well overdue project – Katie’s Christmas present from 2010 (oops!) – it finally became officially finished in this plain black frame that I picked up in recent sales at Lincraft.  Katie is moving out of the flat in about 6-8 weeks time, so I thought I’d better hurry up and finish it so she can take it with her because I probably won’t see much of her after she moves out (not that I really see much of her nowadays even when she still lives here). 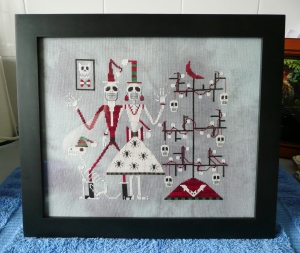 Next up was a frame that I bought from a framing shop a while ago – it wasn’t big enough for the project I had in mind for it, but then as I was picking through my finishing pile I came across “Gold” by The Victoria Sampler and it seemed to fit perfectly.  Unfortunately the photo doesn’t do this one justice – it just glows with all the metallics and the frame suits it beautifully. 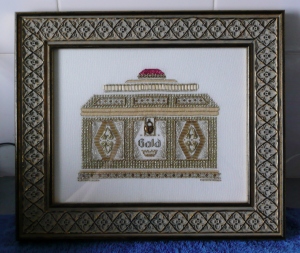 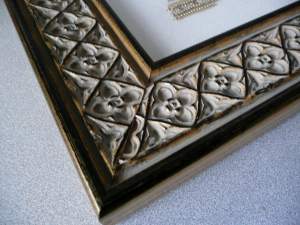 Lucky last were two more small projects popped into simple cheap plain black frames … a great pair of finishes to top off the framing session – I especially love the Halloween one! 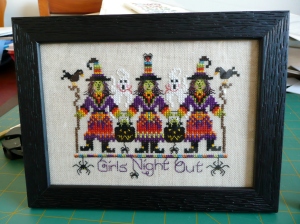 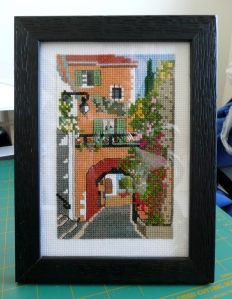 Then today I managed to fix up one of Mum’s lovely stitched ornaments – she’d accidentally missed one row of stitches in the border, so I grabbed the 3371 and popped the last row in to allow this to go into the finishing pile.  That also means that I also score it t go onto my tree – that’s my payment for finishing it into an ornie haha. 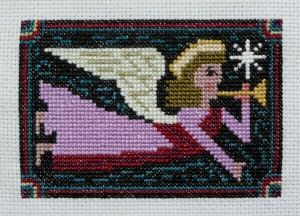 I also stitched another Christmas ornie myself this week, but it’s likely to be used for an upcoming exchange, so I can’t share until I decide on the project that I’m going to send away.  Lucky last I’m currently stitching another ornie that I swear will be the death of me – it’s from the 1998 JCS ornie issue and uses that dreadful old DMC metallic floss (DMC 5282 and 5269) – it’s seriously doing my head in, and I’m amazed just how long it’s taking me to stitch this one little ornie (the entire day today, and I’m still not finished).  I was determined to not put it down until it was finished, but I think it’s finally got the better of me tonight, and I’m quite grateful it’s now bed-time so I can forget about it for a while.  I’m sure I’ll love it when it’s finished, as it really does glow and sparkle in the light of my Ott-lite already, but I just wish it was already finished!!  Just all the metallic leaves left and then all the beading and it’ll be finished … eventually … 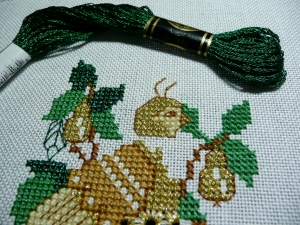 And on that night I’d really better switch off and get some sleep, as it’s almost midnight and I have to be up relatively early tomorrow to head to the Supernatural Convention to listen to some of my favourite character actors from the show (Jim Beaver as Bobby Singer and Misha Collins as Castiel).  The Convention is being run by Hub Productions once again this year – which is where I borrowed the below screenshot from.  Feel free to visit their website for further details on the convention.

One thought on “I’ve been Framed!!”