The last week has been an interesting one, but alas no needles went into fabric for the entire week until yesterday!

Last weekend I got to use my Christmas gift from Katie, tickets to Tap Dogs – alas, we thought Adam Garcia was in it (the primary reason Katie wanted to go), but it turns out he had completed his tour the previous week and returned to the UK to film his TV show.  Unfortunately the guy who took his place might have won accolades and be a highly accredited dancer, but his stage presence was pure arrogance personified to me and it detracted from the show a little bit for me – I couldn’t stand watching him perform and quite frankly wanted to slap him stupid, he just came across as if he didn’t want to be there as well … BUT that didn’t spoil the show totally, as it meant I personally focused all my energies on the other dancers, and loved, loved, loved it.  Every single one of the others brought their characters to the stage beautifully, and it was sheer pleasure to watch them performing.  Unlike myself, Katie wasn’t expecting a dance show with pretty much no dialogue, but I’m glad that she too really enjoyed it and she said she would have been happy enough to go back to see it again.  I would highly recommend it to anyone!!

The rest of the week has been spent trying to hide from the heat – it has been unbearably hot in our little flat, and not many hours of sleep to be had for the first few nights of the week, even with an electric fan going full bore throughout the night in each bedroom.  Yesterday, so I am told, was 43C during the day, and apparently 33C indoors at midnight … yuk, yuk, yukky!

Yesterday, though, I spent the day hiding out in air-conditioned comfort at Wollongong where we had a get-together at Amanda’s place – it’s been well overdue to have a GTG and as always the day was spent drooling over people’s stitching and having a laugh.  Thanks again to Alison for the chauffeuring to the venue and the highly entertaining chats in the car (I always have to drive everywhere when I go out, so I really appreciate the times when I don’t have to drive myself) – and thanks to all the girls for the entertainment value of the day, which is always a given with this group of gals.  And shock, horror, a few of us actually stitched on the day, which is almost unheard of … and we even had two finishes – one for me and one for Alison!  (Mind you, all I did was attach the beads to Sapphire Star, and complete a couple of sections on my canvaswork Sapphire Star piece, which doesn’t particularly warrant an update piccie!) 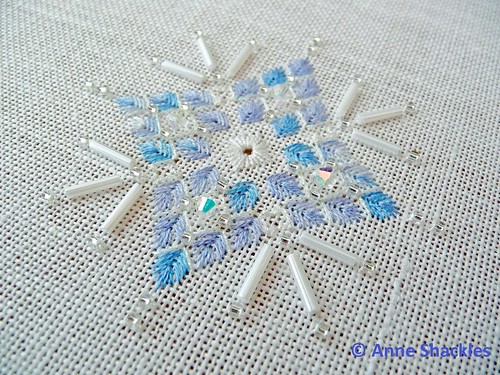 “Sapphire Star” ornament by Patricia Ann Designs
from 2004 JCS Christmas Ornament issue
stitched on white linen with recommended threads and beads,
except for a bugle bead modification (I used the next size down 80000 series)

Alas I wish I had taken more notice of Heather’s changes before I went back to replace my Mill Hill bugle beads for the medium size length (which as it turns out were STILL too long). I think I like the bugle beads that both Heather and Amanda used (I saw Amanda’s in the flesh yesterday), being silver lined instead of white. To be honest I just can’t be bothered unpicking it all now, so this is how it will remain. I originally had plans to do this a couple more times for gifts, so I’ll be better prepared for theirs when I eventually get around to it … short silver bugle beads it will be!!!! Serves me right for not checking the photos first!!

Then last night I quickly threw in a load of washing just in time for laundry curfew closing, in the hope that it will get dry ready for packing.  I’m off to Brisbane tomorrow for work – although I’m also about to head into work today to do some more in readiness for Monday morning (alas I lost access to the computer system that my work is based on for 5 hours Friday afternoon, so I’m even more behind than ever!).  The great thing about going into work today, though, is that there is air-conditioning … ah bliss haha.

And on that note I guess I really should get my A into G and stop procrastinating and go and get that work done … the sooner it’s done, the sooner I’m home! 🙂

10 thoughts on “The week in review”